Interactive videoconference to look at the theme of the judicial system in France and the history of the Paris old Court. 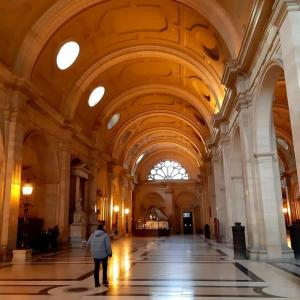 This visioconférence lead by a licensed tour guide (Ivan) allows you to discover one of the most impressive building in the capital.

Throughout lost of pictures and documents you will discover the oldest Palace of Justice in France located on the island of the Cité.

Former royal residence since the Carolingian dynasty, this complex has evolved over the centuries. A veritable place of power but also of history, your conferencier will reveal the mysteries hidden within the walls of this Palace.

You will discover the immense galleries (28 km of gallery!) which make up this set, the large hall of the “Pas Perdus” with impressive dimensions or even the Saint-Louis gallery, which leads to the very prestigious Supreme Court.

Since the inauguration in May 2018 of the new judicial neighborhood at Batignolles, the Tribunal de Grande Instance (TGI) sitting for the majority of judicial cases is no longer in the Palace on the Cité Island, however all the most important jurisdictions prestigious, Court of Appeal, Court of Assisi and Court of Cassation are still present.

In addition to revealing the history of this Palace of Justice, the visioconférence will also focus on the jurisdictional system and its evolution. What are the competences of each jurisdiction and their fields of application? What is the precise function of each magistrate or speaker during a trial? What is the difference between the District Court (DC) and the Grand District Court (GDC). All of these questions will be developed and then supplemented by the conférencier.

After discovering the historical palace of justice on the island of the Cité. This visioconférence will also focus on the new and modern judicial complex of Paris. Open in may 2018 this new center is a reel revolution for the justice in Paris and its suburb. Why a new judicial center was necessary at this period ? What are the differences in between the historical center and the new one ?

It will be interesting to end this conference by comparing and describing both palaces of justices symboles of two different periods.

This virtual conference, proposed by the guide Ivan Denat, will be carried out with the Zoom videoconference tool.

You will receive the access link to the virtual meeting as an attachment to your reservation confirmation email with all the technical details to access the Zoom tool. It is not necessary to install any application on your computer or tablet to access the meeting, just click on the link.