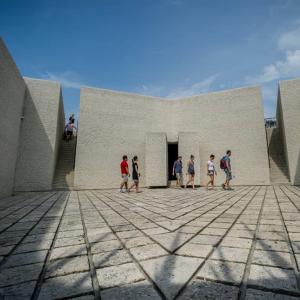 The association Reseau du Souvenir commissioned this memorial that was built by the architect Georges-Henri Pingusson and inaugurated the 12th of April 1962 by Charles De Gaulle.

As a unique piece of architecture, this place suggests certain aspects of the Nazi concentration system: imprisonment, oppression, no possible escape.

The architecture actually leads visitors to a contemplation place, the crypt, where an unknown deported man lies in a grave.

To enlarge the scope of this place and reinforce its impact on the public, an academic course completing the existing one was opened in April 1975 on the first floor. It was renovated in 2016 with the latest historical discoveries on the subject.

Different kinds of deportation existed during the war and people can gather in this memorial to pay tribute to all those martyrs.