Enjoy our first concert of the season in the prestigious salons of the Château de Santeny on Tuesday 16 October at 8.30pm. A selection of romantic pieces by Rossini, Massenet, Saint-Saëns and Debussy will be performed by a trio of violin, flute and harp. Free tour of the castle before the concert. 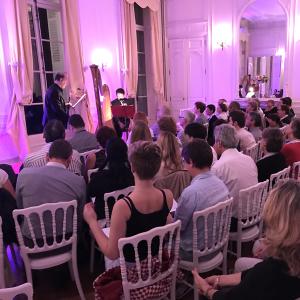 Step through the gates of this 19th-century chateau, hidden away on the edge of a forest, just a few miles from Paris.

From Romantism to Impressionism

An overview of a century of music for flute, violin and harp. Rossini’s instrumental Bel Canto encounters the intimacy of Massenet, the popular roots of Doppler and Suk, the flamboyant lyricism of Saint-Saëns and the anti-conformist modernism of Debussy, who died 100 years ago this year and who described himself as a ‘crazy Wagnerian’ before composing his Petite Suite.

Architecture et Musique is a small chamber ensemble whose members are drawn from a number of prestigious symphony orchestras. They have performed in historical venues and venues of architectural interest all over France. They have been an ‘ensemble in residence’ at Château de Santeny since 2017.

Tuesday 19 March: Romantic melodies with a singer, a cello and a piano (Fonscolombe, Chopin and David).